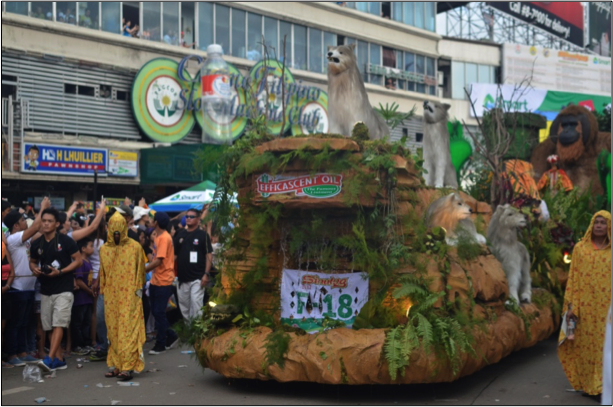 Perhaps one of the most awaited part of the annual Sinulog festivities is the parade of various floats. Floats bearing the name of the various corporate sponsors follow the carousel route up to the Cebu Sports Center. The Best Float Category has always been an avenue for the Cebuano artists to showcase their  creativity and ingenuity.

For several years, Cebu-based International Pharmaceutical Incorporated has been bagging the Best Float category. Over the years, IPI has produced award winning float designs that it has gained quite a number of followers in this category. Its followers and fans, however, were in for a surprise this year when the Best Float category was awarded instead to M Lhuillier Pawnshop.

This year, IPI features an ingenious masterpiece with their exotic-themed float design. It features a collection of diverse flora and fauna under the protection of Santo Nino. This seems a fitting tribute to the Holy Child as well as to the country’s ecological diversity.

IPI’s conspicuous absence from the Best Float Award is pretty disappointing not just for the people behind it but also for its fans and followers. It should be noted that IPI, through its float designs, does not just  afford Cebuanos an avenue for their creativity during Sinulog but also expands that avenue to other festivities all over the country.